it’s been a while since I’ve posted anything here, but i wanted to talk about a project i did last November/December, and how things have turned out with them since.

for the second year, i decided to enter some work into the art show Stitch Fetish in LA. i was drafting a lot of paperpiecing patterns, and this seemed like the perfect opportunity to do some sexy paper piecing. (and tiny – because everything’s always gotta be a challenge!)
.
the triptych “Small Joys: Buzz, Cock and Plug” were stitched up in time for the Stitch Fetish deadline, and maybe someday I’ll finish up the others that i have partially sewn as well.
. 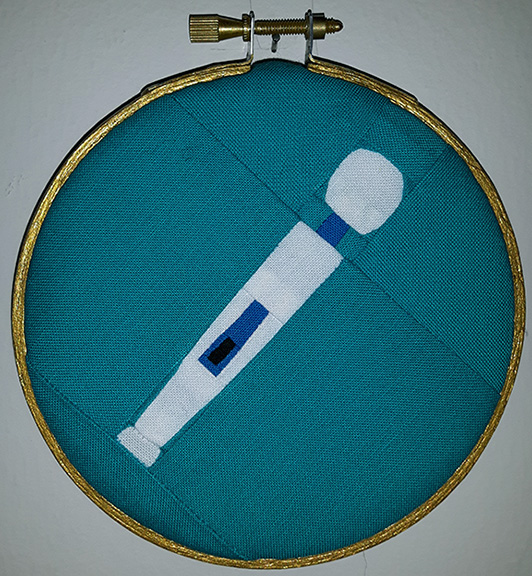 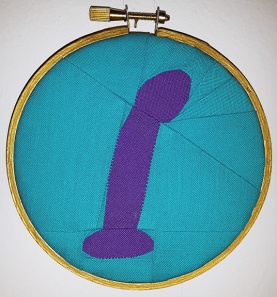 .
I showed Buzz and Cock at my quilt guild in December, and posted Buzz on my instagram the following day. In January I submitted the triptych to BadAss Quilters Society’s online show “The Skin We Are In“, so all three were publicly shown via the BAQs website. People asked me if i would sell the patterns, and i hemmed and hawed.
.

(Buzz on instagram – note quarter for scale!)
.
Little did i know, OwlyJulie on instagram was also working on a series of sex toy paperpiecing patterns over this time period. We’re friends online and i had seen that she was working with testers for a pattern line, but she was saving the actual designs to reveal all at once, so i didn’t know what her images were of.
.
Earlier this week, Julie released her pattern line, Vulgar Quilts, and it turned out to be a series of paperpieced sex toys – Wait, what?
. 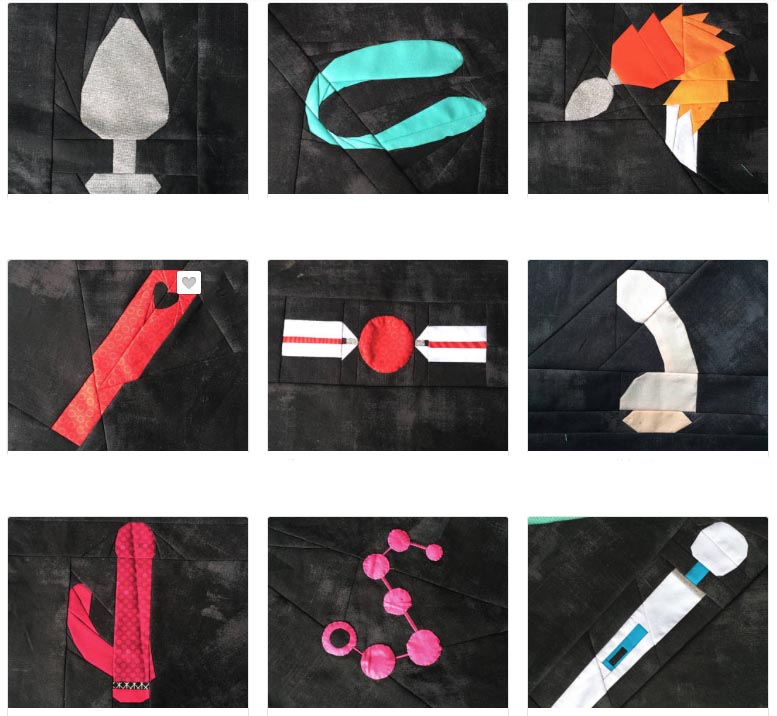 (Julie’s patterns on etsy)
.
People who knew me were confused, they thought that I had released a pattern line, or that I had somehow used Julie’s designs, or that Julie had copied my work.
.
Julie reached out to me, and we chatted a bit over text, and then switched to the phone to actually talk (it’s so easy to forget online that we’re all real people behind these screens, isn’t it?) and I’m so glad that we did!
.
After chatting on the phone, we realized that we were coming up with similar designs at the same time, and we decided that we were going to support each other. I explained to Julie that I hadn’t released my patterns for sale because i don’t have the Illustrator knowledge to make them into patterns for other people to use, and she helped me out with that.
.
While we were at it, we also decided to enlarge my designs into 8″ blocks, so that they can be used interchangeably with Julie’s. While our patterns are similar, they also have some differences, so they play well together. (that pun wasn’t intentional, but i’m leaving it in!)
.
I’ve listed my three designs on etsy, and they’re priced the same as Julie’s. I’ve included a link to OwlyPatterns etsy shop in my listings, and she’s including a link to mine in hers.
.

.
It’s my hope that folks will support both of us, and use both of our blocks in their quilts. More sex toys are always better, aren’t they?